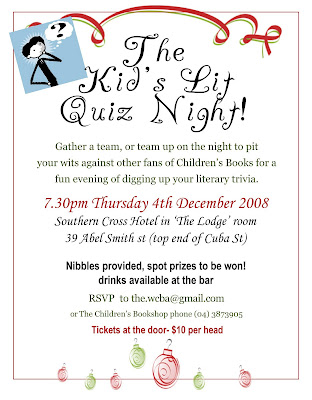 We can hardly believe it- December is upon us which means just one thing... the Kid's Lit Quiz Night!
Get a team together or come and make up one with others on the night. We'll provide the yummy nibbles and dish out spot prizes. A great evening for lovers of Children's Literature and a fun night out.
Click the image on the right to bring it up in a larger window, print it out, stick to your fridge, brush up your trivia and tinsel and come along!

The winner of this year's Jack Lasenby Award is Sand King by Peter Friend,a story set around a sand-castle competition at . The judges felt that although some of the other pieces were more polished, the imagination expressed in Sand King, the strength of the voice and even the writing style were more expressive and had a spark that other stories were missing. Sand King was not without faults, but the heart of the story was strong, it was imaginative in a way that few of the entries were, and it left a lot for the reader to infer.


The judges also decided to highly commend three other stories, which were (in no particular order): Boxing On by Kathy Taylor, Tararua Biscuits by Robin Fleming and Pop and the Crusty Demon by Sharon Stratford. These were all heartwarming and appealing stories based around realistic relationships.

Vince Ford is an award winning Children’s Book writer and a 2008 Judge for The New Zealand Post Children’s Book Awards. His latest work, the Chronicles of Stone series is a departure from his previous work. Set in the Ice Age in the States it follows the journey of twins, Souk and Trei, as they strive to capture secrets that could change the lives of their people. In the words of Graham Beattie, "I foresee a big, promising international future for the Chronicles of Stone trilogy and for Vincent Ford as a writer for teenagers and beyond. Be sure to bring it before any teenage readers you know, they will not be disappointed."

Philippa is a children’s writer who has written over 100 stories, plays, poems and articles for the School Journal and other educational publishers. Her stories have also been broadcast on National Radio. The great chocolate cake bake-off (Scholastic, 2007) was included in the Storylines list of notable books for 2007. Her most recent book, Enemy at the Gate (Scholastic, 2008) is a children’s novel set in at the time of the1936 polio epidemic.

Margaret is a children's series editor at Learning Media where she reads and assesses a great many children's stories every year. She is the editor of Greg O'Brien's Montana Award winning history of the School Journal,

A Nest of Singing Birds.

Margaret is a past convenor of the WCBA, an occasional writer, and an enthusiastic champion of children's literature. 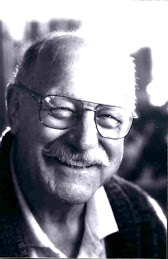